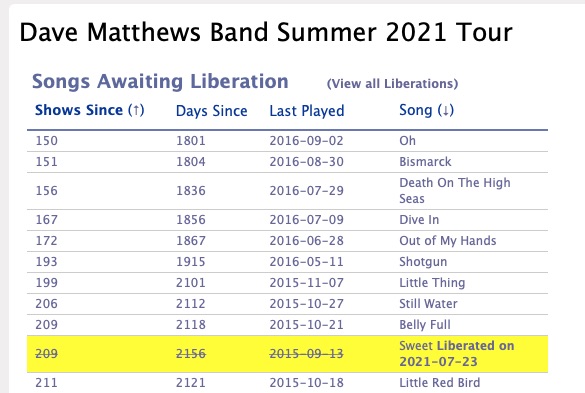 With a song catalog that now claims north of 200 songs not including covers, there's a lot of potential for variety in a Dave Matthews Band show from night to night. Things would get stale pretty quickly if the band played the same 20 songs every night, and that variety is part of what keeps us coming back as fans year after year. One side quest for the frequent DMB concert-goer is hearing rare songs. The band's most played song? That'd be Ants Marching, which has historically been played at nearly *half* of all shows since its debut (which results in a rarity index of nearly 49%). So what's up with the fact that any given show will likely have an average rarity index of something around 30%? There are a lot of songs that get played that show up far less often than once every two shows. And occasionally, the band busts out a song that hasn't been played in a significantly long time. With that in mind, the DMB fanbase came up with a term for those long lost songs that were perhaps once staples, but spent some significant time on the shelf, only to finally return: liberation.

Allowing the term some creative license for a play on the literal definition, in this context "liberation" is meant to indicate that a song has been "set free" of "oppression;" aka "It's been a long time since this song was played." The power of our Tour Central database has allowed us to dig deep and offer up dynamic insight on this phenomenon. Thanks to Tour Central, we're able to show not only every liberation ever achieved, but also what each tour's historical liberation list looked like, and what songs were liberated during that run of shows in a "point in time" style. And we've taken it even further: we treat liberations relative to their performer, so you can track Dave & Tim, or Dave solo as separate liberation lists. We've even integrated liberations with your My Tour Stats page, so you can view all the liberations you've ever witnessed (even ones you might have not been aware of!), and others can also view your list. Even the DMB Hub Stubs have gotten into the act, awarding you stubs based on not only how many liberations you've seen, but if you've seen some variant of an "uber" liberation.

With that in mind, what constitutes a liberation? Admitting that it's a very subjective measurement, a line needs to be drawn somewhere, and we've drawn that line at 150 shows. While we go into the criteria more deeply on the Liberations area of the site, 150 shows represents somewhere around three full years of concerts in the band's modern era, and that feels right to us when determining how long a song should go before being considered "liberated." It's also what drives our "liberation factor." 300+ shows are considered a 2x liberation, while something that hasn't been played in 1200 shows would be an 8x! While we also track number of days since a song's last performance, that metric isn't deterministic in our system. The band's brief 2017 hiatus, and last year's cancelled tour come to mind as two recent examples that push us to value shows over days. We're sure this will continue to be the subject of debate, and that's cool with us. We aren't saying it's the only way to view things, just that it's our way of looking at it for the sake of the feature on Ants!

You'll find liberations front and center on our updated Tour page in Tour Central, and from there you can head over to the Liberation area, where you can break down the data by artist and sort by all manner of metrics to view the data how you prefer. We hope you enjoy the additional insight into just what makes a Dave Matthews Band (or Dave & Tim, or Dave solo) show so special, as well as our recent addition of DMB Hub Stubs and Tour Central Advanced Search, and thank you for your continued support of Ants!