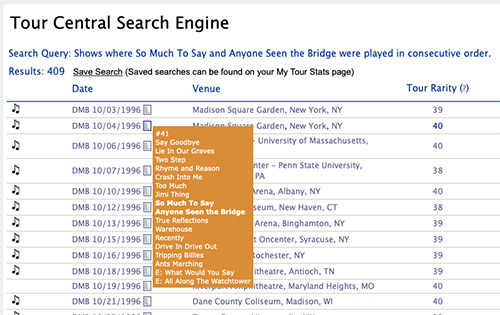 If you were to go back in time, and read the first notes scribbled down on paper that would serve as the seeds to what has eventually grown into the largest single band-focused website on the Internet, you would find two little words in the margins of that crumpled note: "Search Engine." Nearly 20 years later (my goodness!), we're so proud to finally release it.

Sure, Tour Central has always had "search" since its inception. Technically. But for once, technically correct is not the best kind of correct. It was a very basic version that let you search show data fields as if they were text. Sometimes it would work; often times it didn't offer the flexibility to be any sort of useful. It had been on our list, literally, for years (decades?), and we actually managed to put it together in the summer of 2019, but then life happened, and it got put on the back burner.

Ants Tour Central has always been the foundation of the site, with an advanced database that was built from the start to be a powerful and flexible means of storing data about the band's performances. It's been tweaked and extended over the years, but at its core, was intelligently designed to scale as it has over the better part of two decades. The power and flexibility of Tour Central has enabled us to bring this advanced search engine to the site!

The Tour Central Search Engine allows you to search for a single song, or multiple. You can stipulate that any song is an opener, a set closer, in the encore, or the encore closer. Or, you can string multiple songs together and turn up shows where those tunes were played in order. All of these options can be filtered by further metrics, such as guest, venue, artist and show date range. On top of that, you can also have it only display shows that are streamable on DMB Hub, or available to download on Ants. You can even check the box to only search against shows you've seen, so you can create a lot of personal queries. And when you've built your favorite searches, you can save them to your Tour Stats, so they're always accessible (and sharable!).

With a new tour comes renewed energy, and Ants is getting a ton of work poured into it, in various areas (more to come on that!). Stay tuned to Ants for the latest as we roll out more features, and we hope you're enjoying the tour so far!