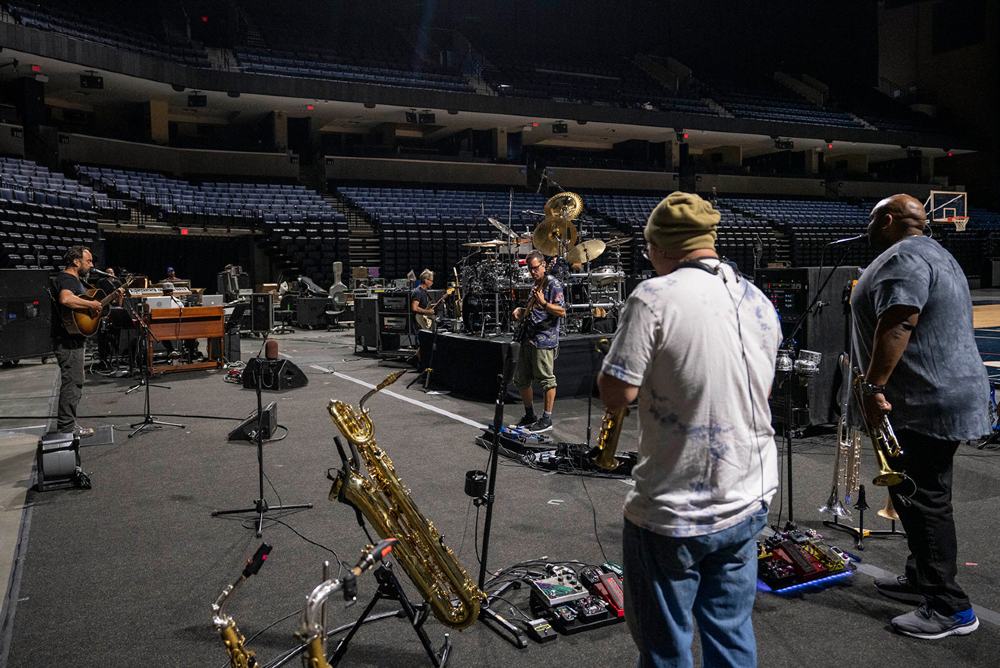 Which leaves us to the most immediate thing we are looking forward to: the 2021 Summer Tour!

(Regression: Is it really a summer tour? Ha It starts in late July, sure, but ends in November. I guess Late Summer into Fall doesnt have the same ring.)
(Regression 2: Personally, I wouldn't mind if the delayed summer start stuck around long term. All those people trying to schedule summer life events/weddings/etc. always worried how it will sit once DMB tour dates are announced. Wouldnt it be nice to have the first ~6 weeks of summer open without that worry? (Edit: Tell me you go to too many DMB shows, without telling me you go to too many DMB shows. Ill go first.))

So what can we expect? Well we can say pretty confidently that new music will be performed this tour. Based on photos from tour rehearsal (very grateful that band members & management have shared), the band members have been playing new instruments that they havent before and/or were spotted in the studio, like the additional ukuleles, acoustic bass guitar, and the Moog sytheniziers (that were brought into the studio) are now part of Buddys rig. On top of that Rashawn has frequently tagged social media posts of rehearsal with #newmusic So we have that to look forward to.

Lets also consider where we left off: the two shows at the start of 2020 before the world was changed (Vegas, and Innings Festival), and how the Band teased what was to come. We saw the returns of songs like The Riff, Stolen Away on 55th and 3rd, Beach Ball and Sweet Up and Down. Excitement was pretty high following those one-off shows. So are these songs still in line to be played after the cancelled tour? In promising news for at least one of the songs, but maybe an indicator for all of them, the band practiced Stolen Away on 55th and 3rd during tour rehearsals recently. On top of song returns, the sets from the two shows saw Come Tomorrow album songs take a step back from the setlist makeup. The Come Tomorrow album was the top played album by song performances for the Summer 2018, Fall 2018, Summer 2019 and Europe 2019 tours. The two 2020 shows had just 2 Come Tomorrow songs each night. (The actual song Come Tomorrow was played at both, but it was likely to be in heavy rotation in an election year.) So does this trend of less songs from Come Tomorrow also stick post-cancelled tour? (New music doesn't hurt that.)

The previous year of Dave web streams has also brought exciting developments. Pay for What You Get and Halloween were played by Dave and Carter together as part of The Warehouse Session / Warehouse Vol. 10. Dave broke out Dodo (!!!) on December 13th for Endangered Rangers stream. And during the second Verizon Pay It Forward Live event Dave performed Beach Ball (again), Up and Away (!!!) (first time in 15 years), and Break For It (!!!) (only played 7 times previously, back in 2010.) This would be a very welcome trend to also bleed into the 2021 Tour.

Thankfully we dont have much longer to wait to find out where the 2021 Tour will take us. It starts Friday July 23rd at the Coastal Credit Union Music Park at Walnut Creek. Maybe everyone will get a chance to watch it? Wouldnt that be nice. :)

At this point I think sentiment across the community is a lot of thankfulness, which is quickly followed by excitement. Were here for it and along for the ride. If youre just getting back on the DMB train, we got you covered. If you don't have it by now (you're crazy), download the DMB Hub app for your iPhone/iPad. DMB breaking news alerts, live song performance notifications, full setlists, streaming show recordings, setlist game, personal stats, badges, and more! (We just added some new badges you can earn too!)

Even if you don't have an iOS device, follow (with notifications) @dmblive for live show song updates, and @SetlistGame for game fun. And don't forget to subscribe to the AntsPodcast. Lastly, enjoy some debate or banter over in the Ants DMB forums. Looking to meet some new DMB friends at your next show, or want insight/tips about a venue? Head over to the Tour Forum and the associated venue thread to chat with others attending.

Know which shows you're attending? Add them to your personal tour stats ("I'm Attending"), either via the DMB Hub app or Tour Central webpage. That way we can make sure you don't miss any upcoming personal stat milestones! Happy Tour Time Everyone!

(This article is one part of a 3-part series on New Songs, New Album, New Tour. See them all here.)