Official: Fenway is the Boston Location

For the fourth time in five tours, the Dave Matthews Band is performing at a baseball stadium. And for the second time, they're heading back to the hallowed grounds of Fenway Park. The Warehouse confirmed what most presumed on March 5; the Boston shows on May 29 and 30 will indeed be at the home of Major League Baseball's Eastern Division's second place team, Fenway Park. DMB performed there in 2006 and those shows were officially released as Live Trax Volume 6. In fact, both previous stadium shows were released as Live Trax, so the odds are in its favor for this one to go that route.

Rumors about Fenway Park Show in the Air 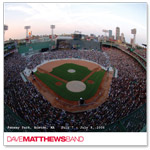 More Than A Feeling? Is the Dave Matthews Band heading back to Fenway? The Boston Globe thinks so. The key word to that item is may, as in DMB may play Wrigley Field in Chicago in 2006, and every other tour stop that's been discussed and then fallen through. So it's still too early to tell if it will come to fruition. You won't see a show scheduled there unless the Sox are out of time for and extended time which appears to be during the last week of June, the third week of July, and the first week of August.

The summer tour is still being planned, according to sources familiar with the tour. Rumors have run rampant on the boards for weeks, but due to the fluidity of the tour, we'd recommend not booking anything until the official site announces something.

DMB played Fenway in 2006, and the shows were released as part of the Live Trax series.